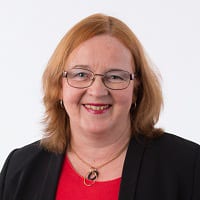 Elisabeth heads a team of 160 economists responsible for IHS Markit’s Economic and Financial Data, International Economic Forecasts, Country, Banking and Sovereign Risk Analyses, Modeling and Scenario quantification, and Applied Economic Consulting. She joined IHS Markit in 2012 to develop the next-generation econometric model designed to quantify the economic impacts of shocks and policy changes at the macro and sector levels.

Between 2000 and 2012, Elisabeth Waelbroeck-Rocha was Chief Economist and Vice-President of BIPE, a French consulting company. Prior to that, she worked 15 years at Standard & Poor’s DRI, a predecessor of IHS Global Insight, where she was Chief European Economist and Research Director for Europe.

Dr. Elisabeth Waelbroeck-Rocha holds a Ph.D. in Economics and a Masters degree in Econometrics from the University of Brussels, Belgium. She worked two years as a Post-Doctoral Fellow at the University of Manitoba, in Canada, after starting her career working for Project Link led by Nobel Prize winner Laurence Klein.