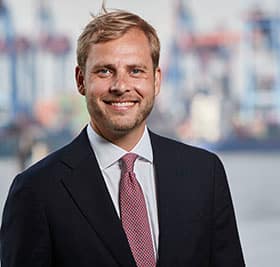 Felix Schoeller is Commercial Director and a Board Member of AAL Shipping with over 14 years’ experience in the shipping sector. He holds a BBA and an MBA.

After completing his initial management training at Columbia Ship Management (CSM) in Hamburg, he joined AAL in 2009. Initially based in Shanghai, he was appointed Assistant General Manager of China and Trade Manager for India, Middle East and the Australia East Coast.

Following a period in Europe, where he gained additional management experience outside of AAL, within several other of the Group’s companies - namely Schoeller Holdings (Limassol) and Columbia Shipmanagement (Hamburg) - Felix returned to AAL full-time in 2014 as Global General Manager based in Singapore.

Felix helped to establish AAL’s North America operations and its wider expansion into a leading global project heavy lift carrier. Today, he is responsible for AAL’s commercial operations worldwide, as well as an integral part of the Company’s corporate and fleet strategy.

Over the years, Felix has benefited from a working knowledge of key components of the wider shipping sector, such as ship financing, ship management, commercial and technical operations in Cyprus, Germany, China and Singapore.