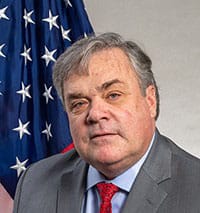 Prior to working in the private sector, Mr. Bentzel served the public sector for ten years as a Senate professional committee staffer including, most recently, as Senior Democratic Counsel of the Senate Committee on Commerce, Science & Transportation. He moved to his role in the Senate after spending four years on the House Committee on Merchant Marine and Fisheries Committee where he served as Counsel for Maritime Policy.

While working in the Senate, Commissioner Bentzel served as one of the principals in crafting the Maritime Security Act of 1996, the Ocean Shipping Reform Act of 1998, and in 2002, after the attacks on 9/11, the requirements mandated for maritime security through the Maritime Transportation Security Act of 2002.

Commissioner Bentzel earned his Bachelor of Arts from St. Lawrence University, his Juris Doctor from the University of Alabama, and his Master of Laws from the Admiralty Law Institute, Tulane University.