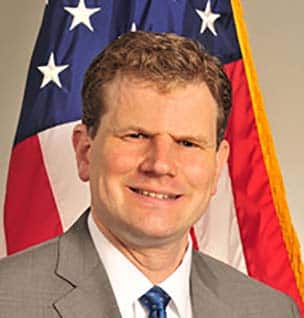 Daniel B. Maffei was designated chairman of the Federal Maritime Commission in 2021 by President Joe Biden. He was first nominated and confirmed to serve on the FMC in 2016, and then nominated and confirmed again in 2019. Maffei has shown a particular interest in addressing the vulnerability of the global transportation system to industry-wide financial and security risks. He has spoken at national and international conferences on the changing nature of the economics of international shipping due to technological advances and the pressures that newer and larger carriers have placed on US transportation infrastructure.

A native of Syracuse, New York, his career in government spans more than 20 years. He was elected to two terms in the United States House of Representatives and was a senior advisor at the US Department of Commerce. Maffei’s time in Congress included service on the House Armed Services Committee, House Financial Services Committee, House Judiciary Committee, and House Committee on Science and Technology. His district included the Port of Oswego, the first US port of call and deepwater port on the Great Lakes. Working closely with the state’s representatives and senators, he was able to secure vital funding to improve the port’s rail link and the resources to better dredge the port.

Maffei has substantial experience teaching and researching at universities and think tanks. His private sector experience includes time as an independent consultant, a senior policy advisor at Manatt, Phelps, Phillips LLP, and an executive at Pinnacle Capital Management.