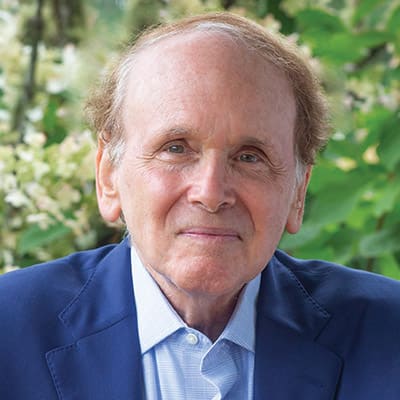 Daniel Yergin is a highly respected authority on energy, international politics, and economics, and a Pulitzer Prize winner. He is Vice Chairman of IHS Markit, one of the leading information and advisory firms in the world with 16,000 employees worldwide. He is Chairman of the IHS Markit CERAWeek conference, which CNBC has called “the Super Bowl of energy” and of “India Energy Forum Presented by CERAWeek” in New Delhi.

Time Magazine wrote, “If there is one man whose opinion matters more than any other on global energy markets, it’s Daniel Yergin.” Fortune noted that he is “one of the planet’s foremost thinkers about energy and its implications.” The New York Times described Daniel Yergin as “America’s most influential energy pundit.”

Dr. Yergin’s new book The New Map: Energy, Climate and the Clash of Nations is described by the London Sunday Times as a “wonderful book.” In it, The Wall Street Journal observes “Daniel Yergin turns his considerable talents to explaining how the world continues to be shaped by oil.” USA Today wrote, “At a time when solid facts and reasoned arguments are in full retreat, Daniel Yergin rides to the rescue.” Another review called The New Map “a page turner.”

A Pulitzer Prize winner, Dr. Yergin is the author of the bestseller The Quest: Energy, Security, and the Remaking of the Modern World. The Quest has been described by the Financial Times as “a triumph.” The New York Times said it is “necessary reading for C.E.O.’s, conservationists, lawmakers, generals, spies, tech geeks, thriller writers,” among many others.

Bill Gates summed up his review of The Quest by saying, “This is a fantastic book.”

Dr. Yergin is known around the world for his book The Prize: The Epic Quest for Oil Money and Power, which was awarded the Pulitzer Prize. It became a number one New York Times best seller and has been translated into 20 languages.

Of Dr. Yergin’s book Commanding Heights: The Battle for the World Economy, which has been translated into 13 languages, The Wall Street Journal said, “No one could ask for a better account of the world’s political and economic destiny since World War II.” Both The Prize and Commanding Heights were made into award-winning television documentaries for PBS and BBC, which Dr. Yergin co-produced, co-wrote, and narrated.

Dr. Yergin has served on the US Secretary of Energy Advisory Board under Presidents Clinton, Bush, Obama, and Trump.

He is a director of the Council on Foreign Relations and a trustee of the Brookings Institution. He serves on the Energy Advisory Council of the Dallas Federal Reserve.

In 2019, Dr. Yergin and former US Energy Secretary Ernest Moniz led a major 229-page study, “Advancing the Landscape of Clean Energy Innovation,” which was conducted for the Breakthrough Energy coalition, led by Bill Gates. The study, which the Financial Times described as “lighting some torches,” identified ten areas for transformational energy breakthroughs.

Among his many awards, the Prime Minister of India presented Dr. Yergin with “Lifetime Achievement Award” and the US Department of Energy awarded him the first “James Schlesinger Medal for Energy Security.” In 2015, the University of Pennsylvania presented him with the first Carnot Prize for “distinguished contributions to energy policy.” In November 2018, he received a “Lifetime Achievement Award in Abu Dhabi.”

Dr. Yergin was awarded the United States Energy Award for “lifelong achievements in energy and the promotion of international understanding.” The International Association for Energy Economics gave Dr. Yergin its 2012 award for “outstanding contributions to the profession of energy economics and to its literature.” Dr. Yergin was awarded the Medal of the President of the Republic of Italy for combining “an understanding of the dynamics of the market with a broad view of the forces of geopolitics as he seeks to point the way to the positive outcomes for the world community.”

Dr. Yergin is on the Advisory Board of the Massachusetts Institute of Technology Energy Initiative, a member of the India Petroleum Ministry’s Think Tank and the US National Petroleum Council, a director of the United States Energy Association and of the US-Russian Business Council and a member of Singapore’s International Energy Panel and on the Advisory Board of the Columbia University Center on Global Energy Policy.