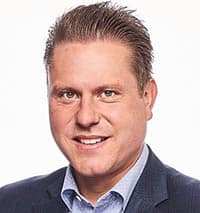 Gary Fast started his career with Canadian Tire Corporation (CTC) in 1995 and moved through a number of progressive supply chain positions within logistics, transportation, and operations planning. In 2006, Fast moved to the merchandising arena in a cross-functional assignment as the buyer for camping equipment for CTC. In 2008, Fast was appointed to the role of associate vice president, Domestic Transportation, whose department oversaw the flow of product from domestic suppliers to distribution centers as well as outbound shipments to retail (CTR) locations. In 2012, he was appointed to the role of associate vice president, International Transportation, whose department oversaw inbound international product flow across the globe including customs clearance, transloading, and equipment acquisitions and maintenance. In 2018, Fast assumed the role of vice president, Transportation, accountable for providing the resources and capacity to ensure seamless, cost-efficient transport of product both inbound and outbound for CTR and all affiliate banners. He holds a Bachelor of Business Administration from Wilfrid Laurier University.