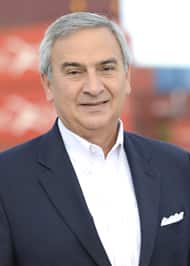 Mr. Newsome became President & CEO of the South Carolina Ports Authority (SCPA) on September 1, 2009 and is only the fifth leader in the history of the organization. He was previously President of Hapag-Lloyd (America), Inc., which is part of the world’s fifth-largest ocean shipping company. In September 2019, SC Ports celebrated 10 years of Newsome’s leadership.