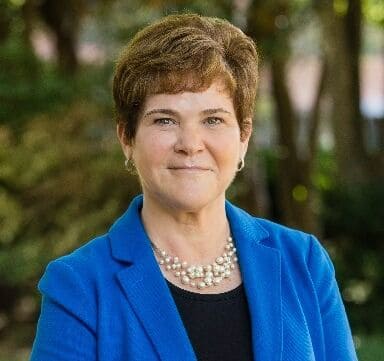 As president and CEO of the U.S. Dairy Export Council, Krysta Harden leverages a strong background within agriculture, sustainability and food policy in fulfilling USDEC’s mission to promote dairy exports and enrich the well-being of people, communities and the planet.

In February 2021, Harden became only the third president and CEO to lead USDEC since its inception in 1995 and its first female chief executive.

Harden joined USDEC in May 2020 as chief operating officer. For nine months—before being named president and CEO—she worked with then president and CEO Tom Vilsack to fine-tune the organization. Under their leadership, the U.S. exported more than two million tons of dairy solids in 2020 – a record. It was an incredible performance, given the challenges that U.S. dairy exporters faced amid a global pandemic.

When she joined USDEC, Harden was not new to dairy. In April 2019, she began working for Dairy Management Inc., which manages the dairy checkoff for 34,000 dairy farmers, to define the vision, strategy and plan forward for U.S. dairy’s environmental commitment. Those goals were officially announced in the fall of 2020, including a plan to reach net zero emissions by the year 2050.

Preceding her service at USDA, Harden was CEO of the National Association of Conservation Districts for five years, providing national leadership for natural resource conservation and representing thousands of conservation districts across the nation.

Harden spent 12 years on Capitol Hill as staff director for the House subcommittee on peanuts and tobacco and as chief of staff and press secretary for former Congressman Charles Hatcher.

Throughout her career in agriculture, Harden has focused on expanding opportunities for women, young people, immigrants, socially disadvantaged producers, returning veterans and retirees, among others. Harden’s passion to help young people is evident by her recent election as board chair for the National 4-H Council.