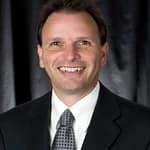 Robert Peek is the Director and General Manager of Business Development for the Jacksonville Port Authority (JAXPORT) in Jacksonville, Florida, a top 10 U.S. container port and one of the largest vehicle-handling ports in the country. He leads the port's Marketing and Sales Department, overseeing all market research and sales initiatives to identify and secure new cargo business at JAXPORT. He also works closely with area economic development agencies to attract new logistics and manufacturing industries to Northeast Florida.

Robert has worked at JAXPORT since 1995, serving in a series of roles of increasing responsibility in Corporate Communications, Marketing, and Sales. He was appointed to his current General Manager role in 2019.

Peek earned a bachelor’s degree from Colorado State University and holds a master’s degree in public administration (MPA) from the University of North Florida. He also holds a Certification in Transportation & Logistics (CTL) from the American Society of Transportation and Logistics. He is a former board member of the North Florida District Export Council and past president of Jacksonville Sister Cities Association.