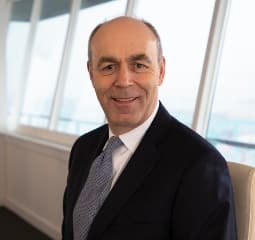 He is a globally experienced leader in the maritime industry with extensive operational experience and a proven track record of growing businesses and creating long-term value for customers and stakeholders.

Before joining the VPA in January 2021, Stephen served as President and Chief Executive Officer for TraPac, LLC.and was responsible for the overall performance of the company with a focus on safety, service, and sustainability. Prior to that, he was the CEO of Global Container Terminals. Previous industry experience includes president and CEO of Port America Group and president and CEO of P&O Ports North America.

In his capacity as CEO and Executive Director of the VPA, Stephen will serve as an ex-officio member of the Virginia Economic Development Partnership (VEDP) board of directors.

Stephen holds a BS degree in Transport Management from Aston University in England.