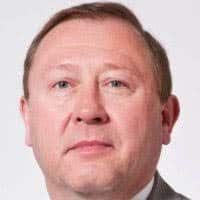 Rick Gabrielson is the president and owner of RS Gabrielson and Associates, LLC, a consulting and advisory practice focused on global logistics and the transportation sector. He has extensive supply chain experience in U.S. domestic truckload, intermodal, L.T.L., parcel, and consolidation operations. Mr. Gabrielson has broad experience in foreign consolidation, trucking and Customs operations. He has over thirty years in various leadership roles, including extensive P&L responsibility serving two Fortune 40 companies.

He serves as Vice Chairman for the U.S. Department of Commerce’s Advisory Council for Supply Chain Competitiveness (ACSCC). The council’s mission is to advise the Secretary of Commerce on practices and methods to improve the competitiveness for commerce within the United States. In 2018 Mr. Gabrielson was appointed to the Advisory Board for the Panama Canal Authority.

Most Recently, Mr. Gabrielson served as the Vice President of Transportation and Global Logistics for Lowe’s. He was responsible for the management for all U.S. domestic and international freight movement of Lowe’s corporation.

From 1987 to 2014 Mr. Gabrielson held a number of positions at Target Stores in both domestic and international functions. In his last role he served as Sr. Director for International Transportation and Global Logistics

Mr. Gabrielson was inducted into the International Maritime Hall of Fame in 2011 and in the same year received the Connie Award.

Mr. Gabrielson is a graduate of Concordia University.