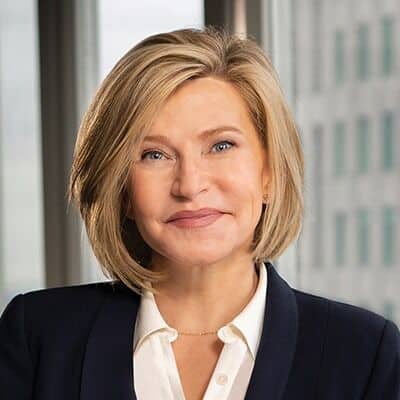 Tracy Robinson was appointed President and Chief Executive Officer of CN on February 28, 2022 and is responsible for CN’s strategic direction and leadership.

Prior to joining CN, Ms. Robinson was Executive Vice-President of TC Energy, President of Canadian Natural Gas Pipelines and President of Coastal GasLink, where she was responsible for the operation and profitability of the company’s federally- and provincially-regulated natural gas pipeline assets. Ms. Robinson helped advance TC Energy’s relationships with Indigenous partners across the country, including the development of agreements with a number of Indigenous communities in Alberta and the advancement of agreements with all 20 of the First Nations along the Coastal GasLink corridor.

Ms. Robinson’s deep experience in the railway industry stems from her 27 years at Canadian Pacific Railway. There, she served in executive roles in the commercial, finance and operation functions, including as General Manager of Transportation Services, Vice President and Treasurer, and Vice President of Marketing and Sales.

She is a member of the Campaign Committee and the Dean’s Advisory Council at the Edward’s School of Business of the University of Saskatchewan. She has also represented TC Energy on the Board of the Canadian Gas Association.